Yes. It is yet another post about macarons. However, I do have some exciting news this time! I have a new recipe that has been working wonderfully. The shells have a nicer texture and are not as sweet, and most importantly, this new recipe is a lot easier to make (or rather, harder to completely ruin).

If you’ve done any research into the making of macarons, you probably know that there is the french meringue method where granulated sugar is poured into the egg whites as you beat them, and there’s the italian meringue method where a hot sugar syrup is poured into the beating egg whites. The resulting cookies are relatively the same with some small differences in the shells. Although it is said that the Italian meringue method has a higher success rate for beginners, I had only ever used the french meringue method since it was working (kind of) well for me and I didn’t want to bother with cooking the sugar. I promise I’m going somewhere with this, so stick with me.

This spring, my mom took a baking class in Taiwan and came home with a macaron recipe unlike any I had seen on the internet. It wasn’t a french meringue, nor was it an italian meringue. It was actually closer to a swiss meringue, where the egg whites and sugar are mixed together and heated to about 110F (45C) before beating. So, I tried this new method and it worked very well. In fact, I found that the ‘macaronage’ – the combining of the egg whites and the almond mixture – required significantly more mixing and was thus much harder to overmix (a problem I often encountered with the extremely delicate french meringue).

So every batch I made with the swiss meringue was turning out quite well, except the shells were a little too hard and the cookies were still too sweet. I experimented with different baking temperatures and times, different resting periods, and varying amounts of both granulated and icing sugar. What I’ve come up with is just right: not too hard, not too soft, and most importantly, not too sweet. So here it is, my new macaron recipe:

END_OF_DOCUMENT_TOKEN_TO_BE_REPLACED

The past few days have been macaron mania in my kitchen and I’ve still only made about half my list of flavours. I made lemon, pistachio, chocolate hazelnut, and coffee. They’re all absolutely delicious although the texture is a little off in all of them in one way or another. There was some underbeaten meringue, as I switched from using a stand mixer to a hand mixer, and one batch I even forgot about and left in the oven for far too long (tried to pass these off as meringue cookies, didn’t even bother filling them they were so crispy).

Even with all the troubles I ran into, these were still lots of fun to make. A couple hollow shells don’t ruin the flavour of the cookies and they are still very tasty. I found recipes for different fillings all over the internet, mixing and altering them until I got something I liked. The pistachio cream and coffee infused ganache are amazing. It was my first time making both of them and they are definitely my new favourites.

I could only snap a few shots of the filled and completed batches before the sun went down, and my dog curiously came down to join.

END_OF_DOCUMENT_TOKEN_TO_BE_REPLACED 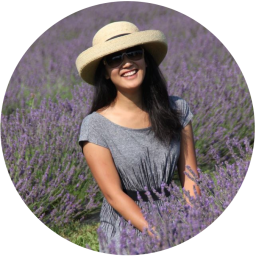 Welcome to OvenLoven, my blog of all things food. I'm Rachel, a lover of baking, cooking, creating, and crafting. Thanks for visiting!